For the owners of one and two family homes built in Massachusetts before January 1, 1975, complying with the rules governing the type and placement of smoke detectors in your home just got a whole lot easier.  Gone are onerous, hard to understand regulations originally adopted in 2010 that required most pre-1975 homes to have a complicated mix of smoke detectors employing differing types of detection technologies. Under the refreshingly simple rules that took effect in December 2016, now only one type of smoke detector has be installed in most older homes in Massachusetts.   The smoke detector rules for newer homes (built after January 1, 1975) remain unchanged, but the straightforward rules implemented late last year for older homes certainly are a welcome simplification!

In this post, only the smoke detector rules governing one and two family homes in Massachusetts are reviewed.  Homes built before January 1, 1975 and not subsequently modified enough to have triggered mandatory upgrades to hardwired detectors are called “older homes” in this post, while homes built after January 1, 1975 are referred to as “newer homes”.

Newer homes in the Bay State have to have hardwired smoke detectors.  The exact type and location of detectors in newer homes depend on the building code requirements in effect at the date of the home’s construction.  If hardwired detectors are more than 10 years old, they will need to be replaced with new units before they will pass inspection by the fire department. Contact your local fire department for guidance on how to make sure your newer home in MA is in full compliance with the state’s smoke (and CO) detector rules.

Older homes in Massachusetts can have battery powered smoke detectors.   New rules that took effect in December 2016 eliminated the previous rules established in 2010 that required older homes to employ both ionization and photoelectric smoke detection technologies.  Older homes now can have photoelectric detectors only.  These detectors must have sealed batteries with a 10 year life expectancy and a hush feature to silence nuisance alarms. (Some of these detectors also detect CO, so are and ideal choice for older homes.)

Older homes that are in compliance with the 2010 version of the rules do not have to make any changes to their detectors to pass the inspection that is required before a home can be sold.

Follow the hotlink in this sentence or in the image below to download the Massachusetts smoke and CO detector rules that took effect in December 2016. 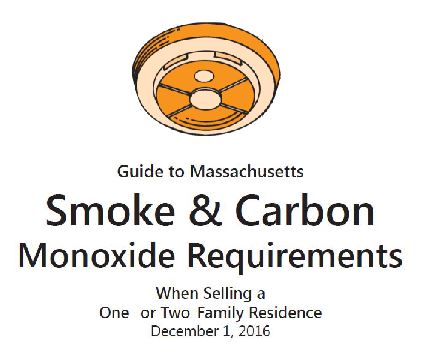 Smoke detector rules in MA vary by date of construction

Massachusetts smoke detector rules differ according to the year a dwelling was built. Newer homes in the Bay State have to have hardwired smoke detectors, while older homes can have battery powered detectors. 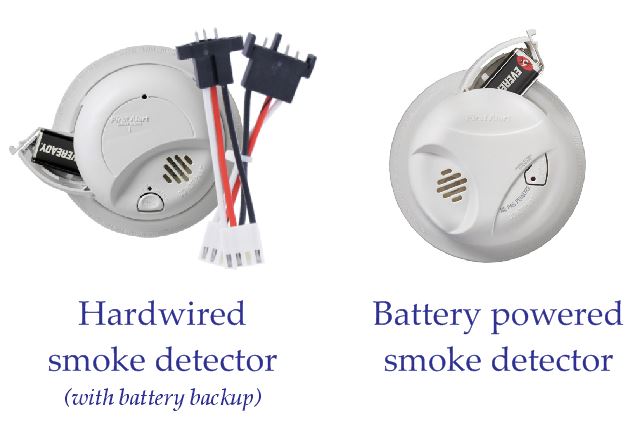 The rules governing placement of hardwired smoke detectors in newer Massachusetts homes vary, based on the exact year the home was built.  If you have questions about how to comply with the rules applicable to your newer home, please consult with your local fire department.

Based on my experience as a real estate broker in Massachusetts, a good rule of thumb is that if your hardwired smoke detectors are 10 years old or older, you should replace them before having them inspected by the local fire department.  (Many modern hardwired detectors will chirp when they are near the end of their life expectancy, but if you have doubt about the age of your hardwired smoke detectors, replace them prior to the inspection.)

From what I have seen pass inspection, installing new hardwired detectors that detect both smoke and CO is one way to pass the smoke detector inspection.

In 2010, changes were made to the smoke detector rules for older homes. The 2010 rule changes were a well meaning attempt to address a widespread problem in Massachusetts: residents were disabling their battery powered smoke detectors by removing the batteries.  Batteries were being removed to silence detectors which were sounding false alarms triggered  by water vapor from kitchens and bathrooms.  Rather than upgrading the smoke detectors to stop nuisance alarms, people were simply removing the batteries.  Not a safe solution! 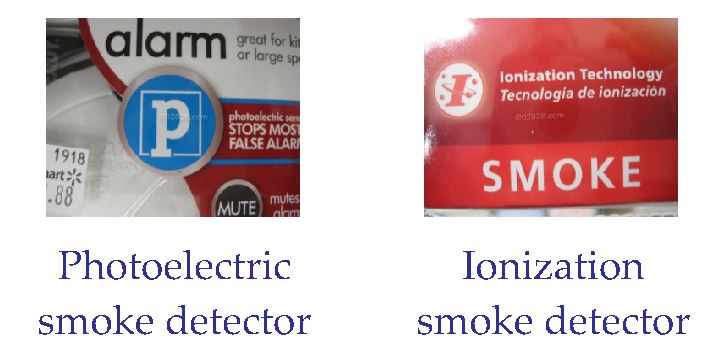 The 2010 rule changes were hard to understand and difficult to implement.  As a real estate broker, I was constantly helping sellers of older homes comply with the 2010 rules.  I often ended up simply buying and installing the new smoke detectors myself before the fire department arrived to do the pre-closing inspection. (That was a lot easier than trying to explain the 2010 rules to mystified home sellers and sending them out to buy the correct detectors!)

The smoke detector rules for older homes were changed again in December 2016.  The 2016 changes scrapped the 2010 requirements regarding ionization and photoelectric technology.  Older homes now can have photoelectric detectors only.  These detectors must have sealed batteries with a 10 year life expectancy, eliminating the ability to remove batteries to silence alarms. Instead, the new detectors must have a hush feature to silence nuisance alarms.  I have found that some of these detectors now also detect the presence of CO.  These sealed battery, dual photoelectric smoke and CO detectors are now what to install in older homes in MA!

It’s very good to see rule changes that simplify compliance with regulations – an all too rare event in modern life!

If you are thinking of selling your home

Now that you’ve seen how to comply with the Massachusetts rules on smoke detectors, check out other helpful articles designed to help you get your home ready for market.  Read here what home improvements pay the most.  Learn how to price a home in Massachusetts here.  Delve into the Massachusetts Title 5 septic system laws here.