Among all Massachusetts cities and towns with populations exceeding 20,000, the Town of Franklin is the safest place to live according to a new report published by ValuePenguin, a nationally recognized personal finance research company. 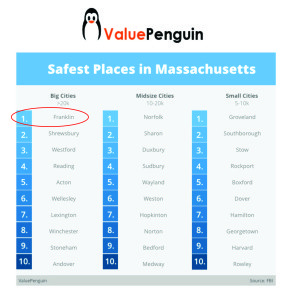 ValuePenguin said it used the latest FBI crime statistics in generating its findings.

In ValuePenguin’s  overall rankings of Massachusetts cities and town regardless of size, Franklin was one of the top ten safest communities in the Bay State. That puts Franklin up with the likes of Hopkinton, Sharon, Sudbury and Wayland. ValuePenguin found Franklin to be safer than such highly desirable towns as Dover, Bedford, Acton, Wellesley, Lincoln, Lexington, and Boxford!

The community safety reports for Massachusetts published by ValuePengiun are not some frivolous rankings posted on an inconsequential website.  ValuePenguin is a privately held company that publishes rigorous research in a wide range of topics, ranging from personal finance (including credit cards, insurance and investing) to careers and education, and most relevant to this post, the best places to live in America.  ValuePenguin studies have been cited in articles published by Bloomberg Businessweek, CNBC, The Washington Post, Politico, USA Today and The Chicago Tribune.

The top safety ranking given Franklin by the professional researchers at ValuePenguin is just one of the national recognitions earned by the town in the last several years. Family Circle Magazine got the ball rolling in 2009 when it named Franklin, MA as one of the top ten places in the US to raise a family. The folks at Bloomberg Businessweek also recognized Franklin, MA as a “top place” when it designated Franklin as the best community in Massachusetts in which to raise children.  CNN/Money gave another national honor to Franklin when it named the town one of the “Top Ten Places to Live and Launch” in America.  In 2013, Franklin was named the safest city in the US by NeighborhoodScout in its annual crime and safety rankings.

All those awards provide clear confirmation that Franklin, MA is a very special place!  You can learn more about Franklin, MA and see homes for sale there by following the hotlink.