As it currently exists, the Trunkline Trail’s crossing at Prospect Street is always awkward, sometimes difficult, and can be potentially dangerous.  The planned underpass is a sensible solution to a complicated challenge.

Prospect Street in Franklin is a winding country road that retains the rural flavor of Franklin’s agricultural past. While not a major artery, the road is a through-street connecting a broad area of the southern and western region of town, so it does get fairly heavy traffic volume.  Vehicles can move quickly along this road. 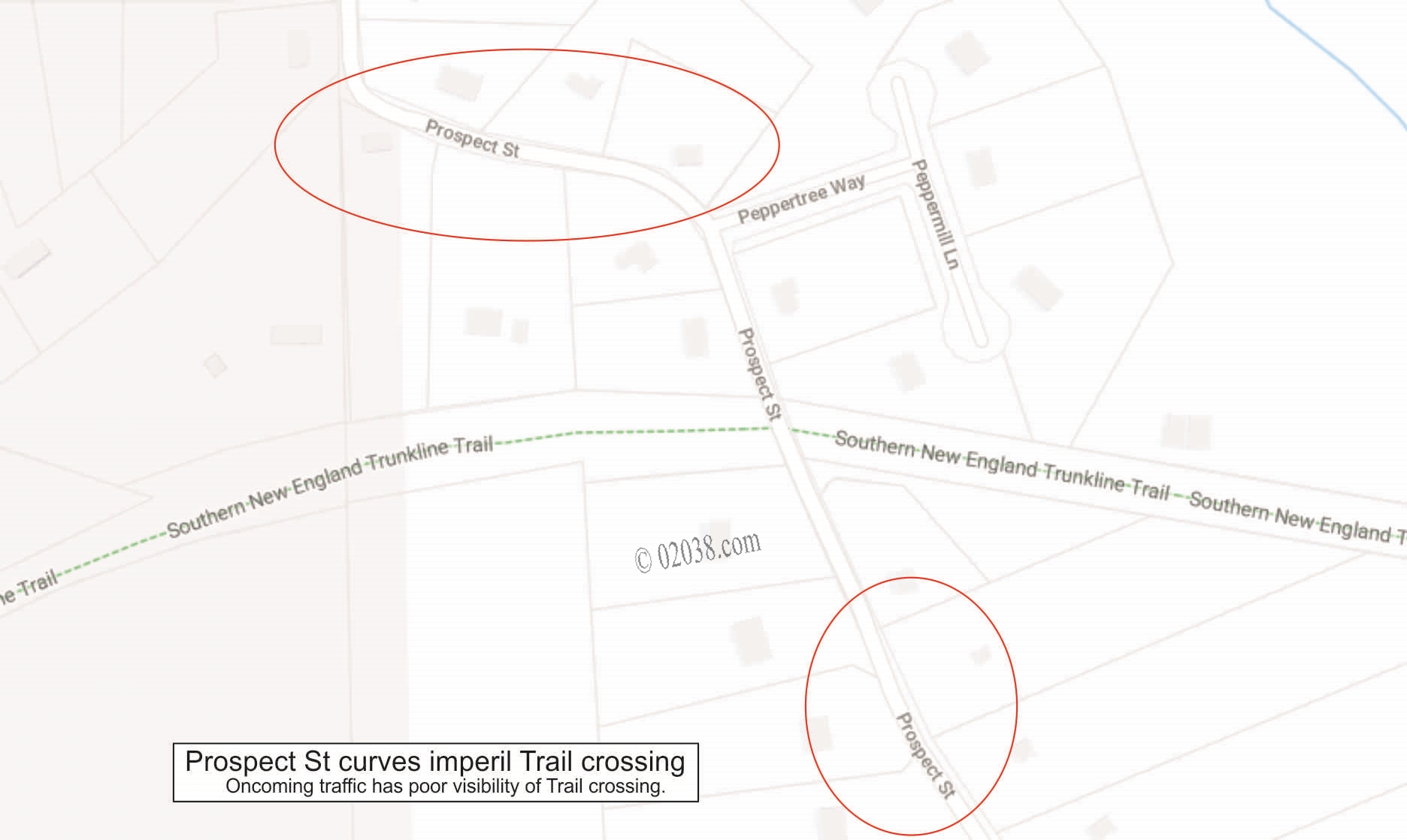 There’s a sharp curve in the road as Prospect Street approaches the Trunkline Trail from the north. Drivers in fast-moving cars can quickly come unawares upon SNETT users crossing the road.

What’s worse, the SNETT crossing at Prospect Street is completely unmarked.  There is no road signage warning traffic of the Trunkline Trail’s crossing, no zebra-striped crosswalk, nothing denoting that there can be at times someone crossing the road at this spot.  It’s essentially crosser and driver beware!

The above image shows SNETT”S approach to Prospect Street from the west.  From news reports on the issue, there used to be a Prospect Street bridge that crossed over the sunken tracks of the railroad when it was in operation.  When rail service was discontinued, the bridge was demolished and the cutting was filled in, creating Prospect Street’s raised roadbed shown above.

The rise is quite an obstacle to walkers and bikers using SNETT.  After rains, matted leaves that cover this slope can become slippery.  Even in dry weather, the steep slope presents a challenge to young children, bicyclists, and casual users lacking sturdy shoes.

Correcting the problematic crossing at Prospect Street is complicated by the fact that the current path up and over the raised roadbed seems to depart the SNETT right-of-way and and traverses private property as it navigates Prospect Street. 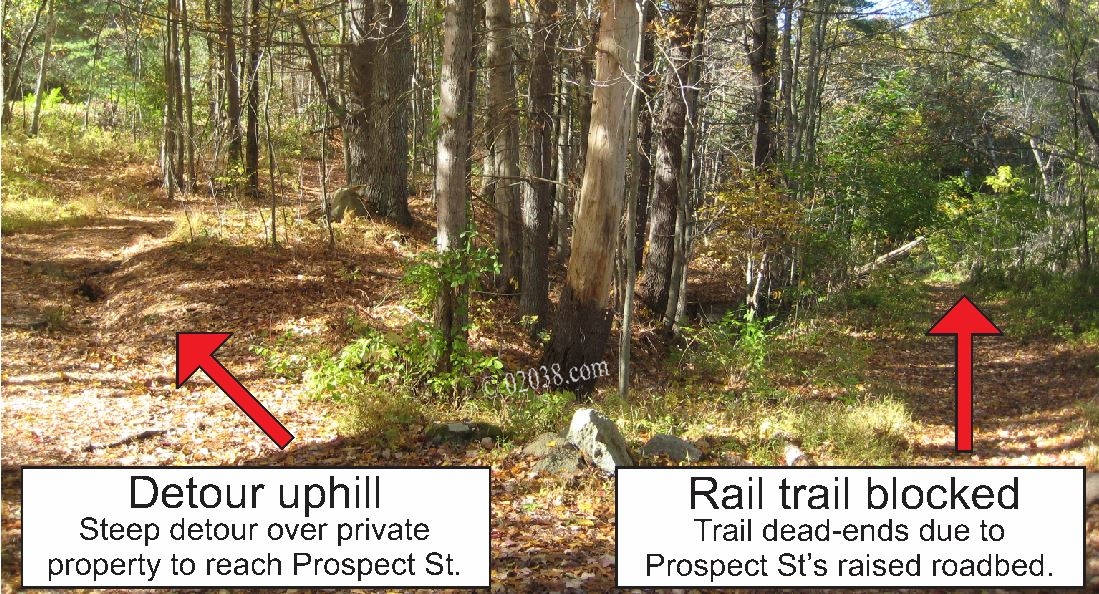 The underpass (termed a “tunnel” in most news reports on the upgrade) seems the simplest way to resolve the many the challenges presented by the SNETT’s current crossing of Prospect Street. 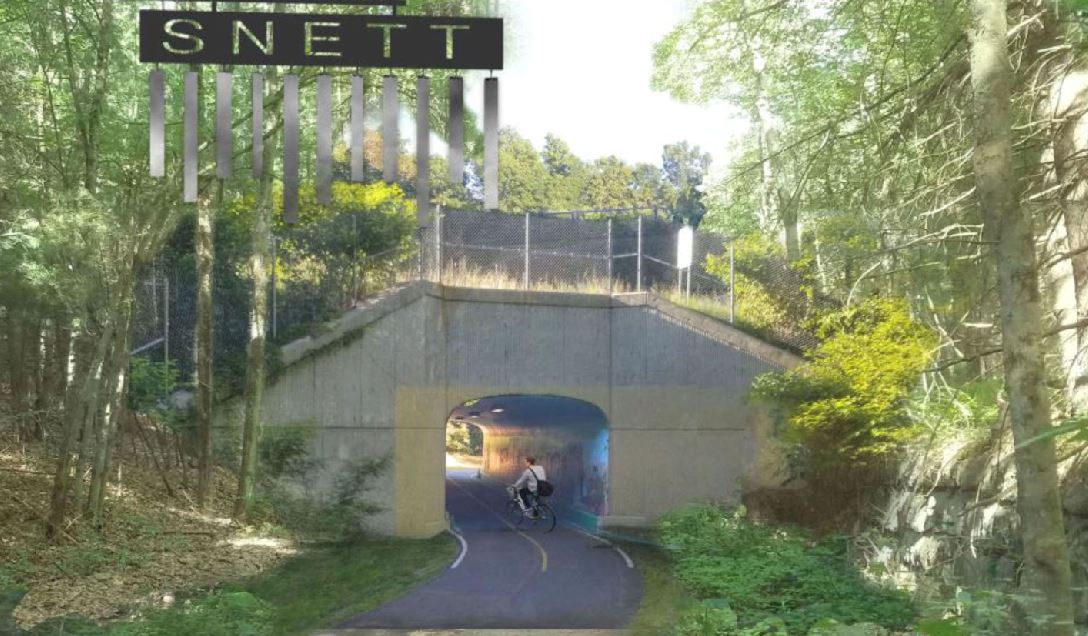 Construction is tentatively expected to be completed by the end of 2020.  This is an exciting improvement to what is a wonderful recreational resource not only for the Town of Franklin, MA but also for neighboring communities on the Trunkline Trail as well!