The Indian Rock Conservation Area in Franklin, MA is a pleasant wooded area with some short walking trails that allow you to walk up to (and actually walk on) Indian Rock, a rounded granite hilltop ending abruptly in a jagged cliff that played the featured role in a bit of grisly early Colonial history in Franklin.

If you bring food and drink, you’ll have an opportunity to enjoy a nice picnic at the site of a fatal skirmish between Native American and Colonial forces that was a part of the savagely bloody King Phillip’s War that convulsed Massachusetts in 1675 – 1676.

The rock formation called Indian Rock is a moderate precipice with a gentle wooded rise on one side which leads via an easy trail to a granite crown.  The hilltop ends abruptly at an exposed rock face that looms some 20 to 30 feet over the forest floor which slopes way from the jagged base of hill.

The granite crown is broad and mostly flat – here’s your spot for that nice picnic – just take care not to go over the ledge!  You can also take the chance to engage in rudimentary rock climbing techniques on the cliff. 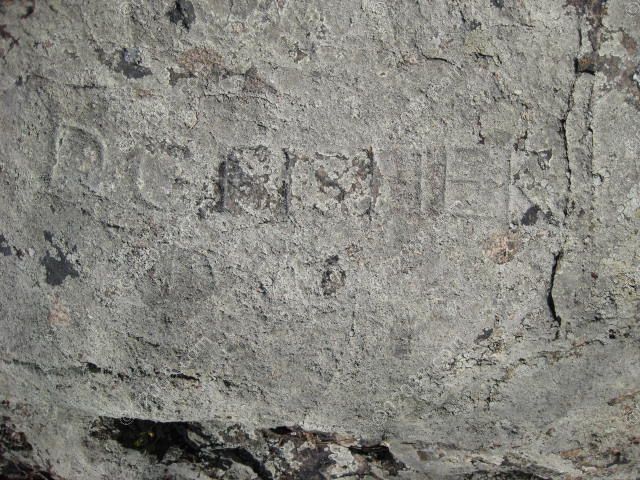 There are some carvings in the rock that were unintelligible when viewed by me; they appear to have been left by previous latter-day picnickers.

A highly abbreviated story of the combat at Indian Rock in Franklin, MA runs this way:

A war band of approximately 20 – 30 Native American warriors were camping at Indian Rock, apparently intent on attacking the Colonial settlement then called Wrentham (what was later to become the Town of Franklin was a part of the greater community of Wrentham in the 1670s).

The Native American war band was discovered late in the day by a colonist searching for his stray horse; the man quickly warned the Wrentham townspeople who took arms to defend the town.

A group of 13 armed colonists snuck up and surprised the camping Native American warriors the following morning just at dawn.

In the struggle that followed, many of the Native Americans were shot and killed outright.  Several survivors sought escape by jumping off the cliff, were injured by the fall and were subsequently easily dispatched by the victorious colonists.  (Hence the name “Indian Rock”.)

There’s no sign of the battle today, although during my visit to the area, my young son greatly enjoyed insisting that he saw arrowheads on the ground and blood stains on the rockface.

The history behind Indian Rock in Franklin makes for a fun excursion with the little ones and gives context for the street names in the immediate vicinity (Lost Horse Trail, Indian Lane, King Phillip Road, etc).

You can access the Indian Rock Conservation Area in Franklin, MA from the cul-de-sac at the end of King Philip Road.